I've not long returned from 10 days of helping out with the inaugural Trans Savoie as a course marshal.  I'm exhausted, but happy, just like all the other helpers and athletes.  The trails we rode were world class and the climbs were true alpine bruts.  The breakfasts and dinners were also bottomless, just like the smiles and fun atmosphere.  There may have been issues each day for marshals and riders alike, but for an event in its first year that is bound to happen.  Hopefully next year will be even better.

The speed of the top riders down 20min descents was unreal.  A highlight for me was being the start marshal for the final stage on day 3, or was it 4? Anyway, after a slog of fire road climb in the heat, Rene Wildhaber and his mate Armin arrived having not broken into a sweat.  Four of them then proceeded to 'train' it down the singletrack timed descent and off into distance leaving clouds of dust behind them.  From our vantage point we could see about 3km of the singletrack ribbon as the riders turned into dots and disappeared into the loamy treeline.

Also on the very last timed descent of the event Neil Donoghue's speed over the roots down towards me was unreal after 15mins of descending, not to mention the previous 5 days of racing!

I didn't get loads of photo's, even though everyday featured world class trails.  I had work to do checking the signposting...  The media guys got some really good ones so hopefully they will get in a magazine or two.  Aussie Dave the super Mechanic is hoping to get an article in an Oz mag.  Marshal Dave got many including Luca owning a rock drop in Meribel.  Aswell as Jonas's dust photos higher up in Meribel.  Tony did have some great ones till he lost the camera, hope the Wife's ok!  Martin however managed to keep-a-hold of his and has some great ones too.  Maybe even some of me? 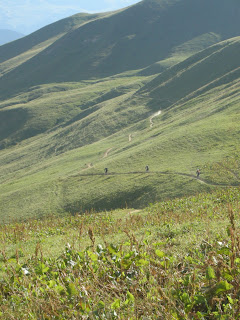 Well done to everyone that made it through both staff and riders!
World class event! Happpy Days! Thanks again to Russ for the bike!
and remember: the liason from here should be signed...

Popular posts from this blog

What guides do between work in the peak of July

July 21, 2017
Summer is here, and after fantastic spring riding in Southern France and then all over Valais, Aosta and Haute Savoie with good friends it's been time to get back to summer guiding, taking hikers around the Tour du Mont Blanc circuit.  There's much worse things to do, but with three weeks off the bike I was itching to get back on some trails.

With a carefully planned week between tours I was excited and made some plans to hit up some classic lines, and some new stuff too. It's mid July now, so in Chamonix valley you have to think carefully about where to go to miss the crowds, and to avoid going on the bike ban trails (July & August).  Luckily it's still easy to find quiet trails in nearby resorts, or to simply drop round the back of a hill away from the frontside lifts. It went a little like this:

April 15, 2017
Verbier is a very mixed place.  There is great piste skiing & free-riding and access to world class ski touring, but more often its known for it's decadence.  Huge picture perfect chalets with wealthy families and their beaufituful/handsome ski instructors fill the resort. And if not that, the seedier side of ski resorts, the bankers with their paid for woman. . .

Talking of horrible, those exposed switchbacks half way down from the Chateau were bloody horrible, lucky the rest of the trail was very good fun.

Well of course, its Swiss Valais, the footpaths are "tip top" and the lift companies are bike friendly.  There were still a lot of pistes open for skiing, but after 11am you can use the lower lift from Le Chable to Verbier to access the snow free trails that lead back into the valley floor.  Time to explore:

July 17, 2017
Family trip to the flow zones of France
Die, pronounced Dee, home to a delicious sweet smooth sparkling alcoholic drink called Clairette, is also home to some of the sweetest smoothest trails around.

A few years ago some mates did a race organised by the Bivouac Enduro team and came back raving about it.  More so the pairs racing format, but they said that the trails were great fun to ride with the company of a mate.

Back in spring before my summer guiding season kicked off I met my parents there for our annual holiday together.  The day I met my Dad he was turning a couple of years into his 60's.  All winter he had told me stories that him and his 'crew' had got into out riding there bikes in the Shire's, Boarders and Mid Wales area's. With this preparation in mind I knew he'd love the potential that lay ahead of us:

After a few days in the Diois we moved onto Barcelonnette in the Ubaye region of the southern French Alps.  Luckily Ash from Transprovence had given …
Post a Comment
Read more

Oli Carr / Chainmark
International Mountain Leader and CTC Technical Mountain Bike Leader. I set up this blog to showcase the riding I do in the Alps.